What do wolves eat in the wild? 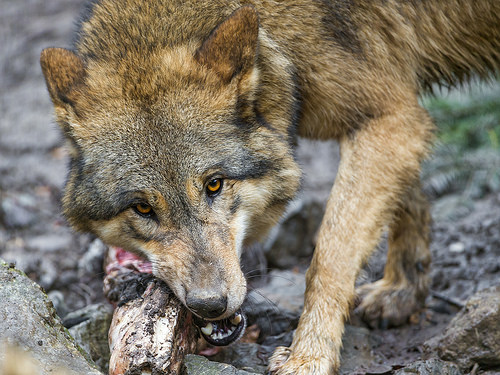 Learn What Wolves Feed On

Wolves feed on meat, and are at the top of the food chain, this means they do not have to worry so much about possible predators. The fact that they are strong and social animals means that they can hunt almost any animal and then consume it.

It is surprising when it is discovered that these animals can consume up to 20 pounds of meat in a single meal. However, for them, the search for food is not daily. That is why they will take everything they can when they can get something. The wolves hunt collectively and this makes them able to successfully kill prey much larger and more powerful than them.

However, the wolves have to be careful because when they are hunting they can find adversaries that can give them a bad blow on their head or on their vital organs, and they can die in the attempt to get food. Being in the right place when the killing is happening is important, and it is here that you will be able to get away from these safe and sound events.

When the wolves are hunting they have to be very careful. While they can dominate the animal, they will hunt anyone. Wolves can run up to 35 miles per hour, but most of the time they will be observed moving at a jogging pace of about 5 kilometres per hour.

Wolves have access to food depending on the location in which they live. For example, in some areas, they are able to feed on moose and deer. Others are known for consuming domestic animals such as dogs and cats. In some cases cattle can be a meal, for this reason, wolves and humans have had a long battle for decades.

When they can not find larger sources of food, wolves eat smaller food, can eat snakes, various types of mammals, birds, lizards, fish, and even some types of fruits and plants, in this case, it is when they have difficulty finding enough food to survive.

Wolves, when fully developed, have 42 teeth in their mouth. They have very powerful jaws that allow them to block their prey, this means they can bite the prey and hold on to it while it is fighting against them. In reality, dams have very little chance of surviving these powerful attacks.

Perhaps it is surprising to know that even when wolves have power and speed, these confrontations do not always end up being a success. The prey they chase is sometimes impossible to master, even a group with several wolves, sometimes finding it difficult to find enough food.

When they go out to hunt, the group, strategically, tries to ambush their prey, and even then, it is possible that the prey can get away from them. The wolves will continue trying to find new prey, these animals do not give up so easily. When it’s time to eat, they swallow as much as they can, they have pointed molars that allow them to extract the meats from their prey and some flat teeth to crush bones.

While the pack of wolves will hunt, some members are left behind to care for the puppies. When the hunters return they will feed the puppies and their caretakers, the adults who have already fed will begin to regurgitate meat so that the little ones can eat.